Does the new grading system for prostate cancer work for Australian men?

In late 2016 a new grading system for prostate cancer was endorsed by the International Society of Urological Pathologists (ISUP). This five-tier grading system is a modification of the Gleason system, based on extensive research. The Modified ISUP Gleason system was designed to better indicate the risk of cancer progression and mortality than the current Gleason system. It's not widely used yet, but new data show that it's an accurate measure of prostate cancer risk when used for Australian men.

When prostate cancer is diagnosed, a number of tests are used to estimate how risky the cancer is, and therefore guide the best treatment and management strategy. These tests include imaging, such as MRI, biopsy (taking samples of prostate tissue for analysis), digital rectal exams and blood tests such as the PSA test. These tests contribute to the staging and grading of prostate cancer. The staging process describes the cancer's size and whether it has spread beyond the prostate. The grading process estimates how quickly the cancer will grow and if it will spread.

The Gleason grading system is the most commonly used method for prostate cancer grading. Gleason grading is done on prostate biopsy samples. During a biopsy, a hollow needle is inserted into the prostate gland and a small sample of tissue is removed. Many samples are taken from different regions of the gland. Imaging is often used to help guide the needles to where the tumours appear. Prostate cancer tumours are usually multi-focal - they consist of more than one tumour. Taking samples from different regions of the prostate helps to determine how much of the gland is affected.

Biopsy samples are preserved in the laboratory, mounted onto microscope slides and staining with dyes that help to visualise the cells and tissue present. The grading process is done by pathologists who examine these microscopic samples. They look for how much the sample appears like normal prostate tissue. The pathologist recognises five different patterns of cells called Gleason Patterns. Pattern 1 looks like normal prostate tissue - closely packed and well-formed glands. Pattern 3, which is the most common, has recognisable glands but some abnormal cells. Pattern 5, which indicates the most aggressive cancer, has lots of invading cells and no recognisable glands. The grading process is done by classifying the most common and second-most common patterns. The Gleason pattern numbers for these two are added together, to derive the final Gleason score. For instance, if the most common pattern is Gleason pattern 3, and the second most common is Gleason pattern 4, then the final Gleason Score is 3+4=7.

Aside from the Gleason score, other information from the biopsy helps to determine how risky the cancer is. This includes the amount of each needle sample that has abnormal cells, how many samples are affected and whether the abnormal regions are found on one or both sides of the prostate gland. 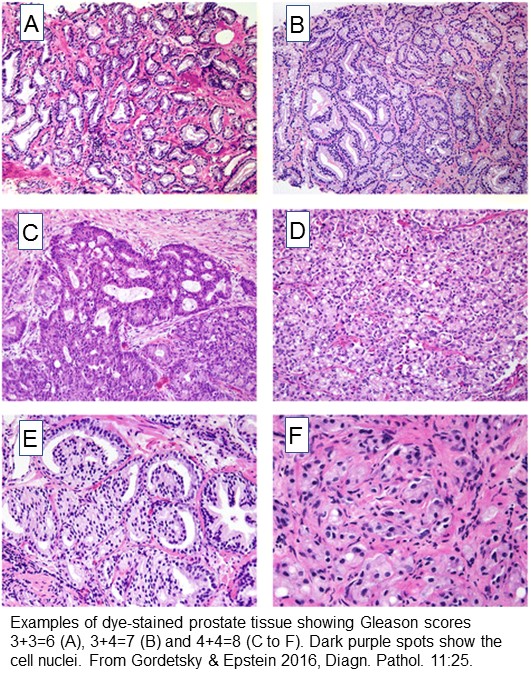 The Gleason grading system was first proposed in the 1960s and has been widely used since that time. Since it was developed, we have learned much more about prostate cancer biology through research. Over this time, the Gleason system has undergone a few modifications, with the most recent being a major change in 2005. The 2016 Modified ISUP Gleason system is essentially another major change to the existing method. It was proposed by a team led by A/Prof Jonathan Epstein from the Johns Hopkins hospital in the US. To develop the new system, these researchers used data from the Johns Hopkins Radical Prostatectomy Database. Outcome data from 7,869 men was used to design a system that would most accurately reflect the prognosis of patients. One aim of the new system was to make it easy to understand and useful for both patients and clinicians.

The new grades are summarised as:

These new groupings reflect the observation that prostate cancers with Gleason score 4+3=7 are significantly higher risk (worse prognosis) than those with Gleason score 3+4=7. Previously, cancers with score of 8 were grouped with 9 and 10 as high risk. The new gradings separate them on the basis of a notably better prognosis for score 8 compared to 9 and 10. The outcome data from the 7,869 men in the registry were used to demonstrate that these differences were statistically significant.

The new system goes further than just re-categorising the Gleason grading system. A meeting of 65 prostate cancer pathology experts along with urologists, radiologists and medical oncologists agreed on many finer points of how to classify the cells and tissues they saw down the microscope. This should help improve consistency between different pathology centres.

Several studies have validated these results, confirming the utility of the new system. Two Australian studies have examined the performance of the Modified ISUP Gleason system, with good results. For men undergoing prostate surgery it was shown that the Modified ISUP Gleason system was a good predictor of whether they would see rising PSA levels after surgery. A study of 496 men with prostate cancer undergoing a radiotherapy clinical trial showed that the new system outperformed the current Gleason grading system for predicting mortality, rising PSA levels and spreading tumours.

Both these studies used a centralised assessment of biopsy results. This means that all the biopsy samples were assessed by the same pathology team through the same clinic to ensure that results were as consistent as possible. This technique is very useful when you are performing a clinical trial or similar study. However, we need to know that the new grading system is useful in the real world, where men diagnosed with prostate cancer get different tests, in different medical centres, and biopsy results are examined by different pathologists. This is a particular issue for a test such as the prostate biopsy, where the results are not automated, rather they are derived from observation of tissue samples by eye.

A new Australian study has recently been published that addresses this issue. The researchers were a South Australian collaboration led by Prof Kim Moretti. To assess the validity of the Modified ISUP Gleason system for the Australian Community, they used data from the South Australian Prostate Cancer Clinical Outcomes registry. This is a long-running registry that collects data about diagnosis, biopsy results, treatments and outcomes for South Australian men with prostate cancer. Data was used from 4,268 men from between 2006 and 2013.

That the new system incorporates the current Gleason scores is very useful for patients, clinicians and researchers. It allows the two systems to be used side-by-side for a period of time to maintain consistency for men already diagnosed. Currently the new ISUP system is uncommon in Australian. Only time will tell whether the Modified ISUP Gleason system is widely adopted for prostate cancer grading, but at least we now know that if it is, it is a valid measure of risk for Australian men.