Some men reject their doctor’s recommendations for prostate cancer treatment. They do this for various reasons. Sometimes it turns out well – they avoid over-treatment. Other times it turns out not-so-well. Either way, it’s a difficult decision to make, which has profound consequences for these men and their families. A new study has interviewed 11 Australian men who rejected their doctor’s treatment advice to find out how this decision affected their lives.

Some men choose not to treat their prostate cancer

A study of people with four different cancers examined outcomes for people who rejected mainstream treatment in favour of unproven alternatives. This study was performed by group of researchers from the Yale School of Medicine in the US and described in a recent research blog. The researchers identified people who had forgone all mainstream cancer treatments after their diagnosis, using the National Cancer Database records in the US. The people they studied were diagnosed with prostate, lung, breast or colorectal cancer between 2004 and 2013. They only studied people diagnosed with cancer that had not spread (non-metastatic). The Yale researchers found records of 281 people who were diagnosed with one of these cancers and chose alternative therapies rather than any mainstream therapies. These people were compared to patients with very similar characteristics who chose mainstream therapies. Results showed that people choosing the alternative therapies were 2.5 times more likely to die during the study follow-up period than those who used mainstream therapies. Differences could be seen for each of the four cancers tested, including prostate cancer. These results indicate that there are harms in choosing alternative therapies over mainstream therapies for treatment of these four cancers.

This evidence presented so far is difficult to interpret. On the one hand, active surveillance for low-risk prostate cancer is shown to be safe and effective. But the Yale study showed that men with localised prostate cancer had a higher chance of dying if they rejected mainstream treatments. This discrepancy comes about because most low-risk prostate cancers don’t progress, but higher-risk tumours are more likely to spread. In reality, every prostate cancer is different, and every man has his own unique set of circumstances. Many men feel they have good reasons to reject the standard approaches of surgery or radiotherapy. Some men even reject the option of a biopsy. This week’s blog describes an Australian study that asks how this decision affects these men’s day-to-day lives.

A newly published Australian study asked what life was like for 11 men who choose against standard prostate cancer treatments. The researchers were led by Prof Kirsten McCaffery from the University of Sydney. Their paper was published in an open access journal, so it’s freely available. This is a qualitative study, where non-numerical information is gathered. The researchers interviewed men about their life experiences after rejecting treatment advice. This is referred to as studying the “lived experience” of these men. The interviewers asked open ended questions and encouraged detailed responses. Their aim was to understand basic concepts from personal experience, rather than to gather numbers and statistics.

The Australian study recruited 11 men diagnosed with prostate cancer who rejected their initial treatment advice. They were concerned about over-treatment – being treated for a tumour that wasn’t likely to kill them. This is a legitimate concern, particularly for men with low-risk prostate cancer. However, only 2 of these men had Gleason 6 prostate cancer.

Why did these men reject standard treatments?

The 11 participants were recruited to the study because fear of unnecessary treatment influenced their decision to refuse surgery or radiotherapy. Most of them felt like they did not have enough information about their options to accept their clinician’s recommendation. Eight of the men felt pressured by their urologist. Many stated that they were concerned about sexual and incontinence side effects. 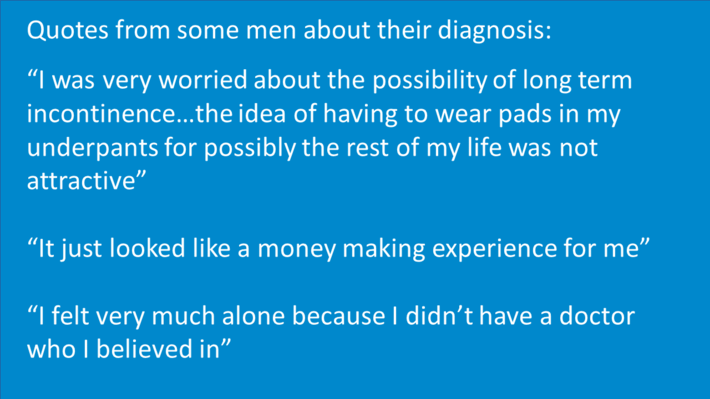 Many of the men reported feeling disillusioned with the medical profession. They believed that they were offered limited, if any, time or resources to encourage or enable them to make an informed decision about PSA testing or treatment. Most distrusted conventional medicine and embraced non-mainstream treatments. These included herbal supplements, Chinese medicine, diet and lifestyle changes. These men had devised their own, alternative management strategies. Many felt abandoned by the Australian healthcare system once they had decided not to take advice from their clinicians.

The impact of treatment rejection on day-to-day life

For these men, this decision had a profound effect on their psychological well-being, life-decisions and employment. Some of the men said their decision to refuse treatment led to conflict in their relationships while others described their partners as being very supportive. One man reported that the decision contributed to his divorce, as his wife did not agree with him. Some left work or reduced their work hours. Many had anxiety and doubt that persisted for years.

Many of the men experienced doubt about their decision and some regretted it. However, this can also be said of men who choose surgery or radiotherapy. But some had successfully lived with their cancer for many years, without progression.

What happened to these men?

The study has more detailed stories for a few of the men. It’s worth reading the original paper for more details about these men’s lives.

At the time of the interview, 8 men had continued to refuse standard treatments, whereas 3 had eventually chosen conventional treatments. One man had surgery 14 years after the initial recommendation. He chose this treatment because his PSA level rapidly rose. When interviewed, he had no signs of metastatic tumours. He says that he doesn’t regret postponing the surgery.

Another man resisted treatment for many years, but eventually developed secondary tumours. It would therefore have been better to treat his cancer early than wait until it spread. He stated to the interviewers: “All that over-diagnosis is to try and save the one, turns out I’m the one so, I have mixed views on it.”

One man chose to have a focal therapy called laser ablation. It cost him $30,000 and required travelling overseas. He stated to interviewers “In hindsight I’d love to get my money back if I could” and “was extremely uncomfortable and undignified, intrusive.” Unfortunately after 12 months, his PSA rose to 24 and a possible metastatic tumour was detected. He proceeded to hormone therapy (ADT) and radiotherapy. He reported not being able to have surgery because of the previous laser ablation therapy. He continues to have side effects such as rectal bleeding and impotence, and suffers from anxiety attacks.

What does this study tell us?

This study has provided insight into the “lived experience” of men who reject their clinician’s treatment advice for prostate cancer. There are substantial and ongoing challenges for these men. These include doubt, anxiety, relationship issues, challenges managing employment and, in some cases, regret. The men often distrusted the Australian health system and chose to pursue unproven alternatives and experimental approaches such as focal therapies.

The study also highlighted some factors that might lead to rejection of standard treatments. These include lack of information about choices, perceived pressure from clinicians, knowledge of over-treatment issues, fear of side effects and mistrust of the health system. It’s important that we understand the men who are making these decisions and the challenges they face, so they can be better supported by their families, friends and health professionals.

What doesn’t this study tell us?

This is not a quantitative survey. It was not designed to estimate the proportion of men that reject treatment or the likely medical outcomes. Instead, this is an information-gathering exercise that can provide a basis for future studies. In other words, a study like this is done before surveys and numbers are gathered, to ensure that we have an understanding of the important issues and concepts.