Studies suggest that oligometastatic prostate cancers vary considerably. In some cases, the disease progresses quickly to widespread metastatic disease, while in other cases the progression to widespread disease is much slower or does not occur at all.

Our previous blog article on oligometastatic prostate cancer described this type of prostate cancer in more detail and the findings in the Tosoian review article. At that time, research into treating oligometastatic disease was in its infancy. The data was based on case series and retrospective studies as no randomised controlled trials had been completed yet. The studies suggested that surgery combined with androgen deprivation therapy (ADT) or with radiotherapy was safe and reduced the need for pain treatment later on, but the effects on progression of the prostate cancer could not be determined without further studies. 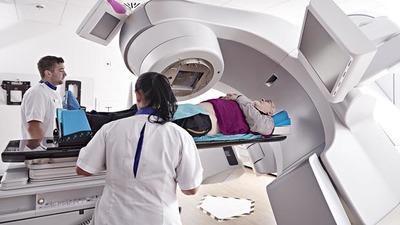 In a phase II randomised clinical trial called ORIOLE (Observation versus stereotactic ablative radiation for oligometastatic prostate cancer), researchers used MDT to treat bone metastases in men with oligometastatic prostate cancer. The type of MDT they used was a radiation therapy called Stereotactic Ablative Radiation therapy (SABR) which is also sometimes called Stereotactic Body Radiotherapy (SBRT). SABR/SBRT is a powerful technique that delivers very high doses of radiation therapy directly to a tumour. It can accurately target the tumour within millimetres and because of its power and accuracy, fewer treatments are required compared to conventional radiotherapy. For the ORIOLE trial, 54 men with oligometastatic prostate cancer were randomised into two groups, one group consisting of 34 men received MDT while the other group consisting of 18 men were observed. Six months after randomisation, prostate cancer progression was less common in the men treated by MDT with 7 of 36 men (19%) showing progression compared to 11 of 18 men (61%) in the observation group.

In another prospective multicentre phase II study called STOMP (Surveillance or metastasis-directed therapy for oligometastatic prostate cancer recurrence), 62 men with oligometastatic prostate cancer were randomised into a group treated with MDT or a surveillance group. For this study two types of MDT were used, the metastases were either surgically removed or treated with radiation therapy (SABR/SBRT). Firstly, the researchers wanted to determine if MDT would delay the need for androgen deprivation therapy (ADT). ADT was given when there were signs of disease progression as seen by symptomatic progression, progression to more than three metastases, or local progression of known metastases. After a median of 3 years follow up ADT-free survival was longer (21 months) for the MDT group compared with the surveillance group (13 months). Both groups reported comparable quality of life at 3 and 12 months follow-up.

Though the results from the STOMP clinical trial are very promising, the presenting author Piet Ost (Ghent University Hospital, Belgium) told delegates of the 2020 Genitourinary Cancers Symposium in San Francisco, California, USA, that as the trial was designed as a phase 2 screening trial the results are not definitive and cannot be considered practice changing. Further studies will be required, including overall survival follow-up studies of at least 10 years.

In a paper published in 2018, Australian researchers reported the results of a prospective single-centre observational study conducted at Royal North Shore Hospital in New South Wales. For this study, researchers used PSMA-PET to diagnose oligometastatic prostate cancer. Fifty-seven men took part in the study, they were all treated by MDT using SBRT. The researchers wanted to know how long it would take for PSA levels to rise by 0.2ng/ml after MDT and defined this period of time as biochemical disease-free survival. After MDT, PSA levels in 70% of the men dropped dramatically to less than 0.03ng/ml. The median biochemical disease-free survival time was 11 months and at 15 months 31.9% of the men still had low levels of PSA. Repeating the PSMA-PET scan for men whose PSA levels rose, showed that while MDT was effective in killing the metastases that were treated, new ones had arisen in other parts of the body. The researchers demonstrated that MDT effectively controlled the metastases treated with minimal side effects, but by 15 months more than two thirds of the men developed new metastases in other parts of the body.

These studies all show that MDT for the treatment of oligometastatic prostate cancer shows promise. But the studies were all very different in design and more research is needed before we can determine how best to treat this disease.

Indeed, improved understanding and treatment of oligometastatic prostate cancer is a priority for PCFA and for researchers, with nearly 60 clinical trials registered on the clinicaltrials.gov database. With such a significant number of studies underway, where each trial builds on earlier discoveries, we are getting closer and closer to major breakthroughs that could significantly change the game for men with advanced prostate cancer. Research holds the key to prostate cancer survival, and we are moving along the path to unlock the door to a cure.