Oligometastatic prostate cancer: what is it and how is it best treated?

With improvements to imaging techniques has come an increase in the detection of metastatic prostate cancer that has spread to only a small number of sites. This stage is often referred to as oligometastatic disease. This should be good news, as earlier detection usually means a more successful treatment for cancer. But clinicians don't yet know the best approach to treating oligometastatic prostate cancer. Although research has started, no randomised trials have been completed comparing different therapies. The important question that needs to be answered first is - what is the biological nature of oligometastatic disease?

What is oligometastatic prostate cancer?

Oligometastatic prostate cancer is a stage of the disease where one or a few small tumours are detected that have spread beyond the prostate. Oligometastatic disease is not a new type of cancer, it's probably existed all along. But with more sensitive imaging we can now detect it. It's likely that new and better imaging technologies, as well as close monitoring of patients during many clinical trials have increased the detection of these isolated tumour sites. Numerous researchers have defined oligometastatic disease based on the number of tumours sites and where they are in the body. But these definitions vary. A recent review in Nature Reviews Urology has defined oligometastatic prostate cancer based on an analysis of 11 studies. Their definition is prostate cancer that has spread to five or less sites outside of the pelvis region.

Research into the best therapy for oligometastatic prostate cancer is therefore complicated by the current uncertainty around the biological nature of the disease when detected at this stage. In their review, Tosoian et al suggest that this will eventually be resolved by genomic studies. What they mean is that the different types of oligometastatic disease could be characterised by differences in the DNA sequences from the tumour cells. Knowing how to best treat oligometastatic prostate cancer will require a more precise understanding of what type of disease has been detected in each patient. 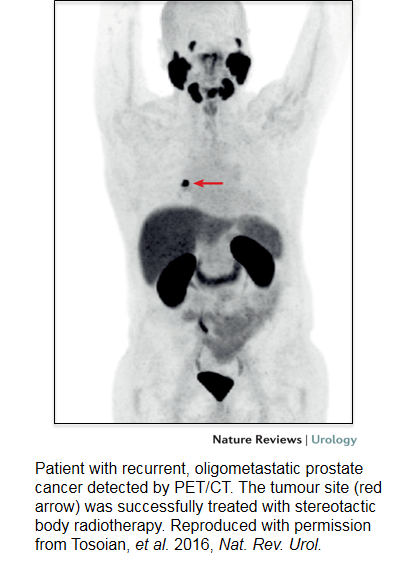 Research into treating oligometastatic disease is in its infancy. The review by Tozoian et al describes a number of studies examining treatment of oligometastatic disease. No randomised controlled trials have been conducted yet, only case series and retrospective studies. Cases series describe the experience of a small number of patients, such as the first groups of patients treated in a specific hospital. Since there is no relevant control group, there no way of determining the best type of treatment. Retrospective studies compare how men have benefitted from the different therapies that they chose. While retrospective studies are very useful, they don't provide enough evidence to recommend a best treatment due to considerable bias in the selection of treatment in these studies.

A case series from Italy was recently published in a top urology journal (European Urology). These clinicians assessed 11 patients with oligometastatic disease treated by open surgery (radical prostatectomy). They also assessed the same men up to 7 years after the surgery. In this study, oligometastatic disease was defined as five or less tumour sites in the bone. Patients were treated with surgery to remove the prostate (radical prostatectomy). They also had extended pelvic lymph node dissection, whereby lymph nodes that may contain cancerous cells close to the prostate and at other areas in the pelvis region were also removed during the surgery.

The cancer had certainly spread in most of these patients. 91% had lymph nodes harbouring cancer cells and 73% had positive surgical margins (indicating cancer had spread beyond the prostate tissue removed). 10 of the 11 patients therefore received androgen deprivation therapy (ADT). After 7 years, 82% of the patients survived and 43% had cancer that had progressed. The authors concluded that their treatment strategy was safe and seemed effective for these patients. Since this case series had no control or comparison group, the clinicians could not make any conclusions regarding whether their strategy was better or worse than a different strategy.

Another case series published earlier this year examined stereotactic body radiotherapy (SBRT) for oligometastatic disease. The authors of this publication were also from Italy. The patients in this study had prostate cancer that had only spread to lymph nodes. Forty patients received SBRT, a highly focussed, high dose radiation treatment. This therapy led to temporary control of the cancer in all but one of the patients. It took an average of 2 years before PSA levels started to rise for these patients. Most patients did not suffer major side-effects but one man had gastro-intestinal toxicity. Overall the treatment was considered to be safe by the study authors. By 26 months after treatment, 40% of the patients had not yet required ADT. In this setting, the aim was to use SBRT to delay the progression of the cancer, delaying the need for ADT and its risk of debilitation side effects.

On the basis of the limited evidence available, the authors of the review article could only make a general assessment of the safety and benefit of the treatments. They stated that prostatectomy and radiotherapy seemed to be safe therapies and reduced the need for later treatment of pain. But it is too early to tell if these therapies increased survival. Stereotactic body radiotherapy was associated with minimal toxicity and provided good local control. But its effect on the progression of prostate cancer needed more research to define. It's important to recognise that there is limited evidence on which treatment decisions for oligometastatic prostate cancer can be made at the moment. Fortunately a number of trials are underway to test different treatments for oligometastatic disease.