A ground-breaking new Australian trial funded by PCFA has tested the benefits of PSMA-PET scans used at diagnosis. Results show that these scans can replace the current CT and bone scans used by men with high-risk prostate cancer at their time of diagnosis. This week’s research blog asks why this trial is ground-breaking and how it could change clinical practice.

What is a PSMA-PET scan?

The long name of this scan is gallium-68 PSMA PET-CT. There are two parts to the scan – an x-ray component (CT) and a PET scan.

CT scan: The CT scan uses x-rays taken in different directions to make a 3D image of the body.

PSMA-PET scan: PET scans use a radioactive dye to light up specific regions in the body. PSMA-PET scans look for areas of the body where the PSMA protein is found, showing the presence of prostate cancer cells. PSMA stands for prostate specific membrane antigen -  a protein found on the surface of prostate cancer cells. Gallium-68 refers to the radioactive part of the PET scan.

By combining the results from the CT and PET scans into one image, we can see the location of prostate tumours in the body.

When are PSMA-PET scans currently used?

In Australia these scans are used by some men with prostate cancer, despite being expensive. They are useful for men:

-who have metastatic prostate cancer at the time of diagnosis

-who are diagnosed with high-risk prostate cancer that appears localised (no tumours see in CT or bone scans). 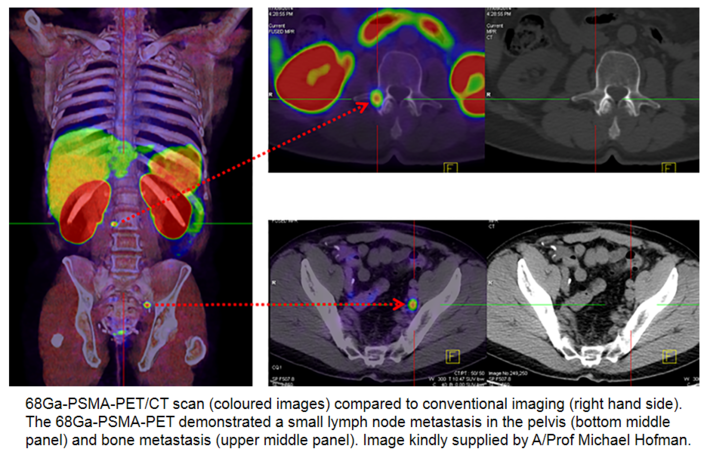 Men who are diagnosed with high-risk localised prostate cancer might find these scans useful. They wish to know whether their cancer really is localised to the prostate gland, or whether it has spread to other regions. Many of these men in the private health system will have a PSMA-PET scan in addition to other scans after their biopsy. But this is not the case for men in the public system. Fewer men in the public system have PSMA-PET scans after diagnosis. It’s likely that the high price is a problem for these men.

There are two important reasons why a clinical trial is helpful for men with high-risk localised disease. The first is to ask whether it’s worth having this expensive scan. Does it actually change the treatment chosen by these men and their doctors? The second is to provide evidence that these scans are useful, which can be used to pressure the government to reimburse the cost, improving access for men in the public system.

ProPSMA, an Australian clinical trial for PSMA-PET scans at diagnosis

Results from an Australian clinical trial testing the value of PSMA-PET scans were published last week in a top journal called The Lancet. This trial was led by Prof Michael Hofman from the Peter MacCallum Cancer Centre.

The aim of the ProPSMA trial was to ask whether PSMA-PET scans were more accurate for detecting metastatic tumours than the current CT and bone scans used at diagnosis. The study also tested whether the scans changed treatment decisions and reduced radiation exposure. The trial recruited men diagnosed with high-risk localised disease by biopsy.

302 men joined the study from 10 different treatment centres around Australia. The men joining the study were recently diagnosed with a biopsy showing high-risk prostate cancer. They were considering surgery or radiotherapy to treat their cancer.

Half of the volunteers had PSMA-PET scans and half had the usual CT and bone scans. These scans were used to look for tumours that had spread beyond the prostate gland. Tumours were found either in distant sites or in the pelvic region of some of these men. Information from their scan together with PSA levels, biopsy and other results were used to prepare a treatment plan. These men were followed-up after 6 months to check for the presence of metastatic tumours.

The main read-out from the ProPSMA trial was the accuracy of the scans. The PSMA-PET scan was 92% accurate in detecting metastatic tumours (or the lack thereof), compared to only 65% accuracy for CT and bone scans.

PSMA-PET scans are therefore more accurate for finding or ruling out metastatic tumours at the time of diagnosis than CT and bone scans, for men with high-risk prostate cancer.

Other findings from the ProPSMA trial

What does this mean for Australian men?

PSMA-PET scans are popular in Australia but they are expensive, costing hundreds of dollars. They are most commonly used by men whose PSA is rising after surgery or radiotherapy treatment for localised prostate cancer. At this stage, PSMA-PET scans are the most sensitive scan to detect new tumours that have spread despite treatment.

PSMA-PET scans are also used by men whose biopsy has shown a high-risk cancer but CT and bone scans don’t see any metastatic tumours. These men may be diagnosed with high-risk localised prostate cancer, but wish to know if there are small tumours that have escaped from the prostate gland. This is known as oligometastatic prostate cancer – where a few small tumours have spread. Currently, men with high-risk disease in the private system often get PSMA-PET scans but men in the public system do not. It’s likely that the high price is putting them off.

The results from the ProPSMA trial have shown that men with high-risk prostate cancer get more accurate results from PSMA-PET scans at diagnosis. They can forgo the CT and bone scans, reducing their radiation exposure. Having the higher accuracy PSMA-PET scans changed treatment plans in 28% of cases and lead to fewer ambiguous results.

The authors of the study state in their publication that “existing guidelines should be reviewed in light of these findings”. They believe that PSMA-PET scans can replace the CT and bone scans used by men after their biopsy and diagnosis with high-risk prostate cancer – a improvement to current clinical practice. We hope that this evidence can also be used to support government reimbursement for these expensive scans.

PCFA are proud to have funded this ground-breaking trial with help from The Movember Foundation.