PCFA have released a new online tool to help empower men with a better understanding of the PSA test for prostate cancer. The PSA test guide can be used by men before discussing testing with their doctor. This week’s blog discusses PSA testing and cancer screening programs in Australia, to unravel some of the confusion around this often-controversial topic.

The online tool goes hand-in-hand with our PSA testing guidelines. PCFA’s guidelines from 2016 recommend that:

Men with no symptoms should discuss PSA testing with their doctor. For men choosing to test, they should be tested every 2 years from ages 50 to 69. Starting at 40 or 45 is recommended for men with a family history.

In this blog article, we discuss:

PSA testing of men with no symptoms  This refers to PSA tests taken by men who don’t have symptoms or a diagnosis with prostate cancer. The aim is to find the cancer early. PSA testing in Australia is common in older men. These are usually men who specifically  ask their doctor for a PSA test.

What is the PSA test?

PSA testing for men with no symptoms: The PSA test is a blood test for a protein called prostate-specific antigen. PSA protein is shed by prostate cells. A small amount of PSA can be found in the blood of men who have a prostate gland. Prostate cancer cells usually shed more PSA than normal prostate cells. So a high PSA reading could mean prostate cancer is present. But high PSA can also signal inflammation, infection or a non-cancerous enlargement of the prostate. Many men (roughly 75%) with high PSA levels don’t have prostate cancer. After a high PSA test, a biopsy can be used to diagnose prostate cancer. MRI is also helpful in detecting the cancer or giving the all-clear before biopsy.

A man who goes to the doctor with symptoms of prostate cancer, such as disrupted urine flow or pain, will probably have a PSA test. This is an important first step towards diagnosis. But it’s not the same as tests done to detect prostate cancer early. Symptoms don’t usually arise until the disease has been around for a while. Early diagnosis involves testing men with no symptoms to get an early warning that tumours are growing.

PSA test to monitor prostate cancer: Once a man is diagnosed with prostate cancer, PSA testing is a very useful method to monitor the cancer. Treatments such as surgery or radiotherapy can reduce PSA to undetectable levels. PSA tests after this time are currently the best way to warn us that the cancer might be returning, or that the whole cancer was not removed by the initial treatment. PSA levels are also an early warning that a treatment is no longer working for men with advanced prostate cancer. PSA tests are used during active surveillance, to indicate whether a low-risk, localised prostate cancer is progressing, and treatment may be necessary. The controversy over the PSA test does not include its use to monitor an already-diagnosed prostate cancer; this is well-established and agreed upon.

It's worth noting that some men with prostate cancer do not have a high PSA level. These won’t be detected early by PSA tests and PSA levels are not so useful in monitoring these cancers. Unfortunately, for many of these rare prostate cancers with low PSA, a finger test (digital rectal exam) is not necessarily useful for early detection.

Is PSA testing helpful or harmful?

PSA testing of men without symptoms of prostate cancer is a confusing and controversial issue. Many experts credit PSA testing as having saved many lives from this cancer. Others point out that it does harm. Non-aggressive cancers are detected and treated, leading to debilitating side effects for men whose lives were not saved. Both these arguments are correct – PSA testing saves lives and causes harm. The controversy comes from how this test can be used to benefit men with early diagnosis, whilst minimising the harms. PCFA’s guidelines make recommendations on how the PSA test can be used to maximise the benefit and minimise the harm.

Is the PSA test useful for early detection of prostate cancer?

We might be tempted to conclude that the introduction of PSA testing in Australia has halved the death-rate from prostate cancer. But it’s not that simple. This time period has also seen vast improvements in treatment and the introduction of many new drugs that are helping men to survive and live much longer after a prostate cancer diagnosis. These must have played a role in reducing the number of men dying each year from this disease. There are many different factors that affect the prostate cancer mortality rate. PSA is only one of these factors, and its relative contribution to the decrease in mortality rate is difficult to estimate.

In Australia, most cases of prostate cancer are caught early. PSA testing is quite common, even without a formalised population screening program, such as that for breast cancer.

What are the harms that can result from PSA testing of men without symptoms?

When we talk about the harms that come from PSA testing, we don’t mean from the actual blood test. This is a simple blood test performed in clinics across the country that has an extremely low risk of causing problems. The harms from PSA testing of men without symptoms of prostate cancer come from overdiagnosis and overtreatment.

Overtreatment: In the past, these over-diagnosed men have been subjected to treatment by surgery or radiotherapy. They suffer treatment side effects, anxiety of diagnosis and often high costs associated by treating a cancer that would otherwise never have harmed them.

A recent scientific publication has predicted that, from the years 1982-2012, 41% of Australian men diagnosed with prostate cancer were over-diagnosed. Over-diagnosis was defined, in this study, as diagnosing a man with prostate cancer when that cancer was not going to lead to any symptoms. Therefore, the diagnosis, and any treatment, were unnecessary and potentially harmful. This result is consistent with similar international studies.

Active surveillance for men with low-risk prostate cancer is now common, which is helping to reduce the harms from treatment. However, men on active surveillance have gone through the stress of diagnosis and have the continuing worry that their cancer will progress. These men need to have regular blood tests, scans and biopsies, adding to the cost and worry. For these non-aggresive prostate cancers, many believe that it would have been better for many of these men to not have been diagnosed in the first place.

Why doesn’t PCFA recommend a PSA screening program, like the breast cancer program?

There have been 5 large, high quality trials of prostate cancer screening programs. These trials were reviewed in a meta-analysis study, published in 2018. The total number of men enrolled in these 5 studies was 721,718. These trials are:

The meta-analysis combines the data from all 5 trials to come up with an overall estimate of the results for all people who participated. This analysis showed that PSA screening programs had little or no effect on the number of men dying from prostate cancer or dying overall.

If the PSA test leads to early diagnosis, it’s difficult to understand why a screening program doesn’t save lives. One way to comprehend what is happening, is to consider the PLCO trial from the US: 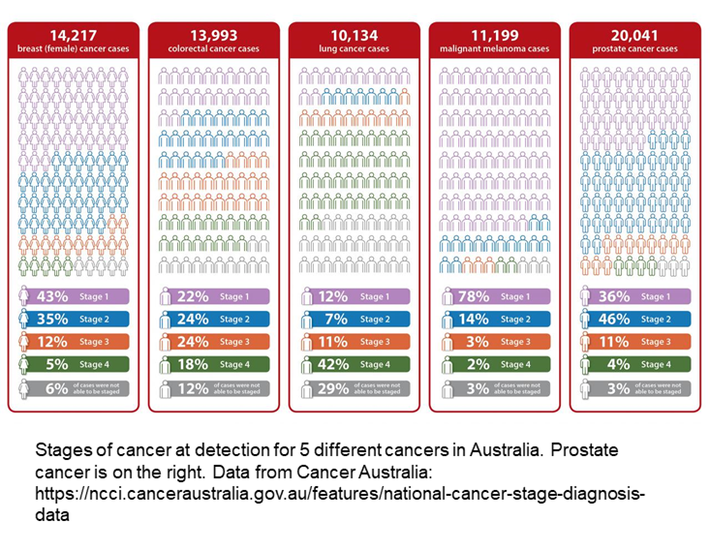 What does all this mean for Australian men?

Men wishing to have a PSA test for early detection of prostate cancer should discuss this with their doctor. Before talking to a doctor, men can find trustworthy, evidence-based information from our online PSA test guide to help them make the decision of whether to be tested. PCFA’s guidelines recommend that, for men who wish to be tested, they have a PSA test every 2 years between the ages of 50 and 69. PSA tests with readings over 3 ng/ml should be investigated further. Men with a family history of prostate cancer should talk to their doctor at age 40 to discuss if and when to start testing.

PCFA doesn’t recommend testing for men over 70 or under 50 unless, they have a family history. This is because evidence shows that testing men in these age groups may lead to more harm than benefit. However, each man’s situation is different, and each man must make this decision as best he can. By using our PSA test guide and talking to a doctor, men can be supported with the best evidence to help them make this important decision.