Patterns of prostate cancer diagnoses and deaths around the world

Diagnosis with prostate cancer around the world

Data from GLOBOCAN tell us that Australia has one of the world’s highest rates of men being diagnosed with prostate cancer. The highest estimated rates of new cases per year were found in Australia/New Zealand, Northern America, West and Northern Europe, and the Caribbean. The lowest rates were found in South-Central Asia, Northern Africa, and South-Eastern and Eastern Asia. You can see the world-wide patterns in the image below. Countries with the darkest blue colour have the highest rates of diagnoses (when the differences in ages are taken into account). From this map, it can be seen that the highest rates of prostate cancer are usually in the wealthiest and most developed countries. 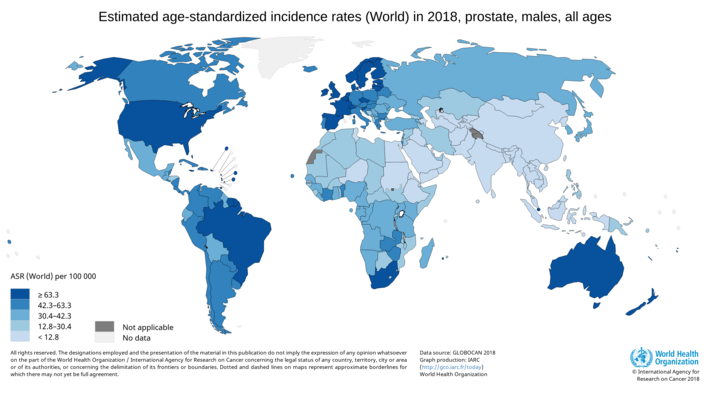 Deaths from prostate cancer around the world 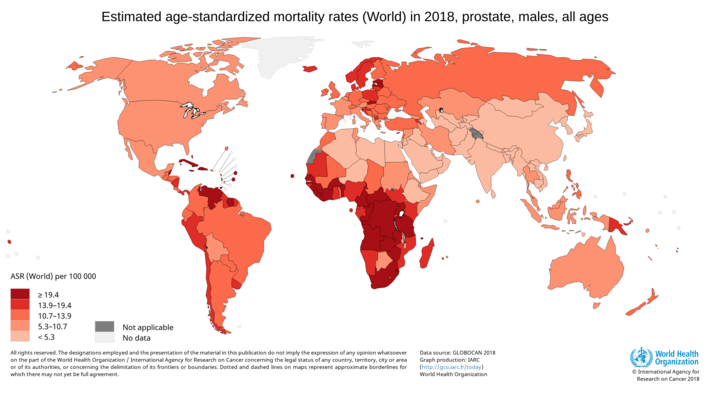 Why don’t the rates of diagnoses and deaths match?

One possible reason for this pattern is PSA testing. In countries where PSA testing is common, like Australia, more men are diagnosed. These men would have a higher chance of early diagnosis, improving their chances of surviving prostate cancer. In countries with low levels of PSA testing, there may be less men diagnosed early, and less diagnosed altogether. Subsequently, the chances of dying from prostate are higher. Although PSA testing is likely to impact on the patterns of international diagnosis and death rates, it’s not the only factor that will be affecting these patterns. We don’t know the most influential reasons for these patterns.

Data from GLOBOCAN were also used to track patterns over the time. Comparing across 44 countries, the study showed that most had stabilised rates of prostate cancer diagnoses. This was the case in 35 countries. Five countries saw a decrease and four an increase in the rate of men being diagnosed. The rate of men dying from prostate cancer was also stable in most countries, decreasing in some.

The situation in Africa is different. These maps show that many African countries have prostate cancer as their leading cause of cancer diagnosis and of death for men. This is consistent with previous studies showing that African ethnicity is a risk factor for prostate cancer. Prostate cancer is clearly a big problem in Africa. 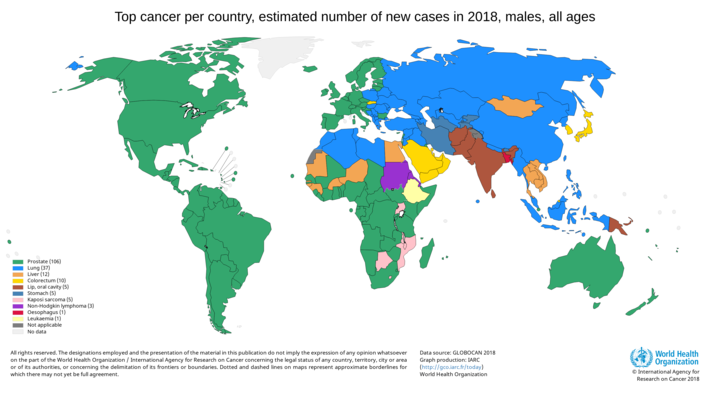 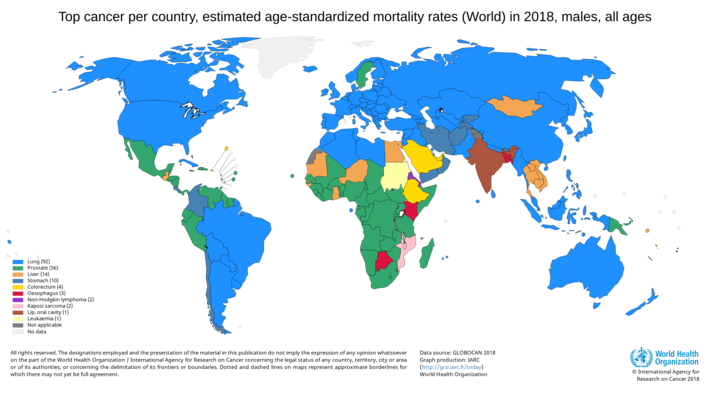 The Nigerian Ministry of Health made prostate cancer a priority in its National Cancer Control Plan in 2008. The focus has been on awareness and screening. Nigeria has prostate cancer screening and education programs, but there have been difficulties keeping these going in the long term.

A study of Nigerian men at risk of prostate cancer involved psychologists following-up with men after their PSA tests. They wanted to know what factors affected these men’s willingness to keep being tested, or to seek help after a high PSA test.

1661 men from diverse ethnicities participated in the survey and PSA testing study. Most of these men were married (82%) and 95% described themselves as religious. Most paid for their own health care expenses. Results from the survey indicated that they had low anxiety regarding blood tests and digital rectal exams (the finger test). 8% of these men had a high PSA score, and were referred to local hospitals for follow-up care. Most of the men were happy to keep having regular PSA tests. Many were willing to pay for more tests, so long as they were affordable.

Some of these Nigerian men (33%) were concerned about continuing PSA tests. The barriers to accepting PSA testing included issues with costs, fitting around work time, location and time. Some men  did not appreciate or adhere to recommendations for PSA testing overall. Reasons for this included a lack of understanding of the disease or the tests, distrust of modern medicine, fear of invasive procedures and costs. Most Nigerian men in the study welcomed the program and were grateful that someone had followed-up on their health after the initial PSA test.

Results from this study have been published in the journal Lancet Oncology. The authors, from the University of Nigeria, stated that:

“NGOs (non-government organisations) have an important role to play to improve the health of Nigerians, but this alone is not enough to meet national cancer plan targets. Stronger partnerships with the government and other organisations through a unified approach focused on continuous planning, implementation, and evaluation of education, screening, and disease management is vital to controlling prostate and other cancers. Africa has done well with other diseases. Now it is time to collectively take more steps to stop cancer.”