Prostate cancer in Australia – what do the numbers tell us?

The Australian Institute of Health and Welfare (AIHW) has just released the latest figures on prostate cancer incidence, mortality, and survival in Australia.

The trends over time are different to the trends we see for many other types of cancer, including a decreasing number of diagnoses since 2009, when cases peaked in Australia. In that year, 22,146 cases were diagnosed, compared to 16,741 cases expected to be diagnosed this year. With an ageing and increasing population, we might ordinarily expect to see the number of men diagnosed increase, but this has not been the case.

According to the AIHW:

“Prostate-specific antigen (PSA) testing and associated changes in guidelines can affect the number of new cases of prostate cancer. PSA testing was introduced in 1987 and is thought to have contributed to the peak in incidence in the 1990s. The PSA threshold at which males were referred for a prostate biopsy was lowered in 2002 and might have contributed to the peak incidence during the mid to late 2000s (Smith et al. 2008).”

That is, testing protocols may have contributed to over-diagnosis and over-treatment in the mid to late 2000s, whereas in recent years a revised set of PSA Test Guidelines (2016) has helped to address this concern, in parallel with the availability of new treatment protocols, such as Active Surveillance and Watchful Waiting, which reduce the potential risk of over-treating prostate cancers that pose minimal risk.

There are two standard measures for understanding big-picture cancer trends, these are the number count of people diagnosed, and the rate, expressed as the number diagnosed per 100,000 people. Due to Australia’s ageing and increasing population, and the link between ageing and cancer risk, it is common to see the number of Australians diagnosed with cancer increase, while overall rates trend downwards, thanks to better prevention strategies for many cancer types, and improved methods of detecting more common cancers in their earliest stages and effectively treating them.

Expressed in charts, this is what the trends look like for prostate cancer incidence and mortality in Australia for the period from 1982 to 2019: 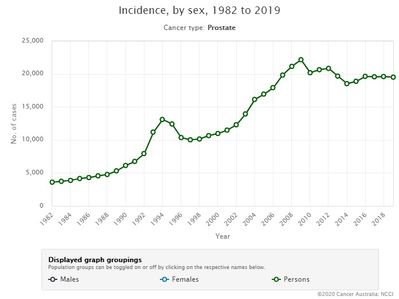 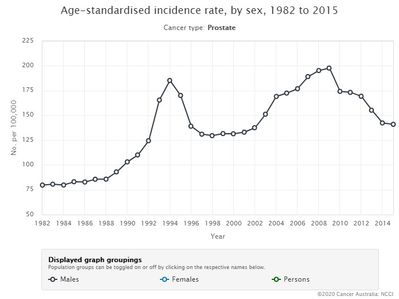 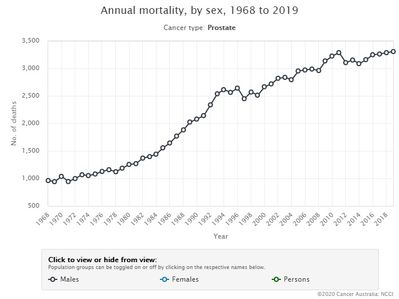 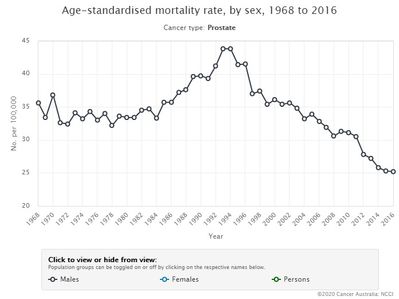 The improved mortality rate is a key measure of success and is reflected in increasingly higher rates of survival over time:

This is tremendous progress, thanks to rapid advances in research and treatment.

According to the government agency, Cancer Australia:

Survival from cancer can be influenced by various factors including demographic characteristics, tumour type, stage of the cancer at diagnosis, other prognostic indicators and availability of treatment. Cancer survival refers to the proportion of patients expected to survive their cancer at a specified point subsequent to the diagnosis of cancer, or from some designated point after diagnosis (conditional survival). It is commonly presented as the probability of surviving their cancer at a specified time after diagnosis, e.g. 5-year or 10-year survival.

The measure ‘5-year relative survival at diagnosis’ is defined as the ratio of the proportion of people who are alive for 5 years after their diagnosis of cancer (observed survival), to the proportion of people in the general population alive over the same time interval (expected survival). Those in the general population are normally matched for age, sex and calendar year to those with cancer. Observed survival is calculated for Australia, using data from population-based cancer registries. Expected survival is calculated from life tables for the entire Australian population.

Survival rates for prostate cancer therefore vary depending on the stage of cancer at diagnosis, the patient’s age, and the characteristics of the cancer itself, among other things.

Prostate cancer is the most commonly diagnosed cancer in Australian men. Estimates suggest that 16,741 Australian men will be diagnosed this year (https://canceraustralia.gov.au/affected-cancer/cancer-types/prostate-cancer/statistics). 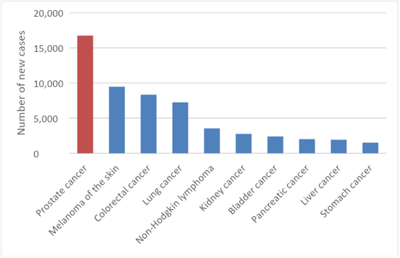 Evidence shows that incidence rates for prostate cancer increase with age, and are highest among the age group 70-74, decreasing thereafter.

That is, a male’s chance of being diagnosed with prostate cancer increases with his age.

Prostate cancer is the second most common cause of cancer-related deaths in Australian males after lung cancer. Of concern, estimates suggest that 3152 men will die from prostate cancer in 2020. The charts below are from the government agency Cancer Australia. 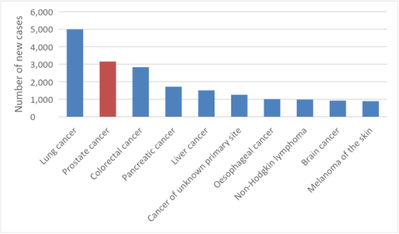 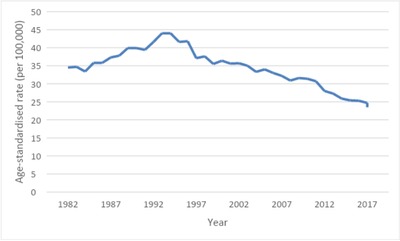 How does cancer stage influence survival?

Cancer stage refers to the extent of spread of cancer – the higher the number between I and IV, the further the cancer has spread. In Australia, five-year relative survival for prostate cancer diagnosed at Stage I is 100%. The survival rate for Stage 4 cancers is just 36.4%. 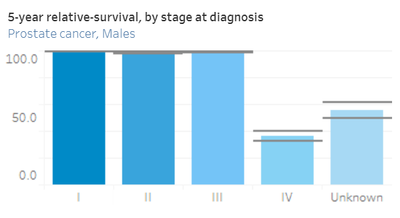 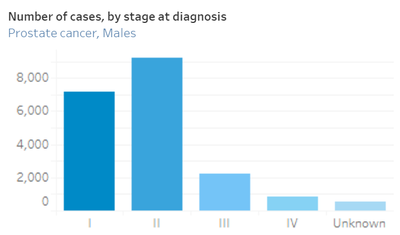 Those in marginalised groups commonly experience poorer outcomes when it comes to cancer survival. This is true for prostate cancer, and in some instances the gap has widened over recent years, meaning that advances in research and treatment have not been shared equitably across the population. For Australian males affected by prostate cancer, evidence suggests those in regional and rural areas, and those who live in areas of relative socio-economic disadvantage, experience higher rates of mortality and lower rates of survival. 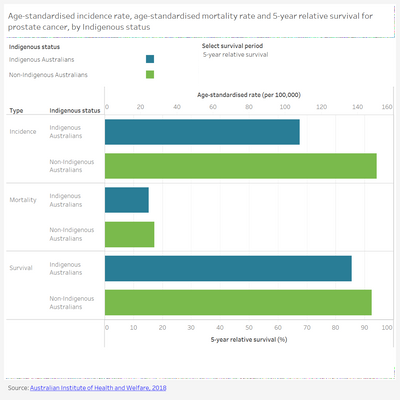 Awareness of your family history of prostate cancer is key to early diagnosis and survival of the disease:

Prevalence refers to the number of Australian men alive today following a diagnosis of prostate cancer over any given data collection period, with the national data set containing records from 1982 onwards.

By 2040 it is predicted there will be 372,000 men living with or beyond prostate cancer in Australia, representing a 68% increase and the greatest number of men or women diagnosed with any single cancer.

How can we use this knowledge to reduce the burden of prostate cancer?

Understanding prostate cancer incidence, mortality, and survival is key to reducing the burden of cancer. The data provides a foundation for estimating improved or reduced survival from clinical trials and other medical and scientific studies and allows policy makers and practitioners to tailor treatments and strategies for different groups, based on the risks we can identify from analysing statistical trends.

It also allows us to monitor our rate of progress against set targets. One of Prostate Cancer Foundation of Australia’s key targets is to significantly increase the number of Australian males who are diagnosed at Stage I of the disease, so that we can improve survival prospects and eliminate avoidable deaths. At the individual level, it helps us to target our messaging to men in at risks groups, based on the knowledge that men will be at an increased risk as they age and if they have a family history.