Race as a risk factor for prostate cancer

Prostate cancer diagnosis rates vary widely across the world. Even when we take into account differing ages of people in different countries, some countries have a much higher rate of prostate cancer cases than others.

There are less men diagnosed with prostate cancer in African countries than nations such as Australia and the US. As the average life expectancy is relatively high in Australia, this is not too surprising. Older men are more likely to be diagnosed, and men in Australia live to be older, on average, than many other countries. 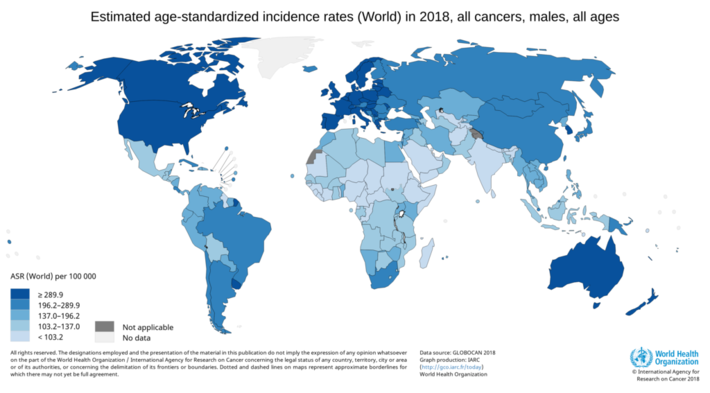 Scientists use a method called age standardisation to allow comparisons between countries in which the average ages of people are quite different. Age standardisation uses maths and census records to adjust for the effects of the different ages from the comparison. Rates of cancer diagnoses are often described as ASR, meaning Age-Standardised Rate. This is usually stated as the number of people diagnosed per 100,000 population per year, adjusting for the different ages present in the population.

When the numbers are adjusted to account for different ages, Australia still has a very high rate of men being diagnosed with prostate cancer. In fact, it has the highest rate of prostate cancer diagnoses in the world. Australia’s rate is about five times higher than the rate of the same aged men being diagnosed in many African countries. The US, Canada, New Zealand and many European countries all have relatively high rates of prostate cancer. Why diagnosis rates are higher in these countries is a complicated question to answer. It’s likely that many different reasons are combined to produce this pattern.

What we do know is that there is something different about the genetics of men of African origin that puts them at greater risk of being diagnosed with prostate cancer, if they are living in the US.

Risk of dying from prostate cancer for African American men

We know that African American men are more likely to be diagnosed with prostate cancer, even when age and other factors are taken into account. So genetics is a risk factor for prostate cancer diagnosis.

But this does not necessarily mean that genetics, and African heritage, is a risk factor for dying of prostate cancer. It depends on the reasons for this increase in deaths. There is speculation that unequal access to medical care may be responsible for the increased deaths, not actual genetics or race. It’s known that African American men are diagnosed at a later stage, on average, and are less likely to receive medical care that is in accordance to best practice guidelines.

A new study from the US has asked whether African genetics is making men more likely to die from prostate cancer, or whether other factors are at play. This study was conducted by a team of researchers from the University of Michigan, led by Radiation Oncologist A/Prof Daniel Spratt.

To perform this study, the researchers used numbers from three large databases containing details of US men with prostate cancer. Medical records from a total 306,100 men were used in this large study. The researchers only included men diagnosed at the non-metastatic stage.

These three databases were:

This database contains details of a large group of prostate cancer patients. Records were used from 2004 onwards, where details of T-stage, Gleason score and PSA are available. Records from 243,433 white and 52,840 African American men were used from this database. The white men had an older average age at diagnosis (65 compared to 62 years). 17.8% of the men in this group were African American.

The VA records come from men treated by surgery from five “equal-access” medical centres in California, Georgia and North Carolina. These men had equal access to medical care, regardless of their race. Records from 2,459 white and 1,513 African American men were used from this database. The white men had an older average age at diagnosis (64 compared to 61 years). 38.1% of this group were African American.

The RCT data are medical records of patients from four large clinical trials made available for such research. These prostate cancer patients were treated at one of 150 different clinics in the US and followed-up in the long term. Their treatment was standardised, as required by the clinical trials. Therefore, differences in the way they were treated were minimised. So their race would have minimal effect on their access to treatment. Records from 4,725 white and 1,129 African American men were used from this database. The white men had an older average age at diagnosis (71 compared to 69 years). 19.3% of this group were African American.

Studying the records from the large SEER database, the researchers found that African American men with prostate cancer were more likely to die of this disease. But once they took into account age, diagnosis stage and other factors, these differences were close to disappearing. This result indicates that other factors, not genetics, may be causing the increased chance of dying.

To confirm this finding, the researchers performed the same analysis using the other two databases. The VA and RCT database results showed no difference in the rate at which white and African American men died from prostate cancer. Since the men from which these records were taken had more equal access to medical care, this study indicates that access to care, not race and genetics, is affecting their chances of dying from prostate cancer.

This study provided evidence that African genetics is NOT a risk factor for dying from prostate cancer, only for being diagnosed with prostate cancer.