A focus on focal therapies

Active surveillance provides monitoring of prostate cancer while temporarily avoiding the risk of treatment side effects, such as erectile problems. But men on active surveillance live knowing they have a tumour that is not being treated. These men may benefit from focal therapies. Focal therapies are treatments being developed for prostate cancer that aim to remove the tumour, without needing to remove the whole prostate. The hope is that focal therapies can help prevent cancer progression with minimal side effects.

In September 2016 a review on focal therapies was published by a group of clinician/scientists in the leading journal Nature Reviews Urology. The senior author is Australian uro-oncologist and urologist A/Prof Nathan Lawrentshuk. This article summarises this review, which as for many such publications, currently remains behind a paywall.

Focal therapies aim to remove the cancerous part of the prostate without requiring the whole organ to be treated. This should reduce the side effects compared to treatments of the whole prostate such as radiotherapy and surgery. Focal therapies have been used for many years to treat other cancers such as breast, brain and liver cancer.

A focal therapy will be particularly useful for a cancer that has one "focus of origin". These cancers have one specific region of the prostate where the cancer cells are growing from. For an organ such as the brain or liver, a focal therapy is necessary, since the whole organ cannot be safely removed, compared to the prostate.

Historically, focal therapies have not been considered ideal for prostate cancer for two reasons. Firstly the prostate can be safely removed, meaning surgery is often a curative treatment. However an increasing number of men are choosing active surveillance, for whom focal therapies would be a good option.

The second reason is that prostate cancer is usually multifocal. Prostate cancer cells often grow from more than one region of the gland. Recent studies suggest that patients could benefit if they had unifocal cancer, or had one main region and only very small additional regions of cancer.

Focal therapies, will therefore only benefit select patients. Matching the right therapy to the right patient is crucial.

Many new focal therapies are being developed for prostate cancer. Some of these are available in Australia. As these treatments are very new, we have limited knowledge on how effective they are. Using imaging technology, doctors can predict that the tumour region has been removed by the treatment. Side effects such as incontinence and erectile problems can also be studied in the short term. However studies that determine whether these treatments have an impact on cancer progression and survival will take many years to complete. 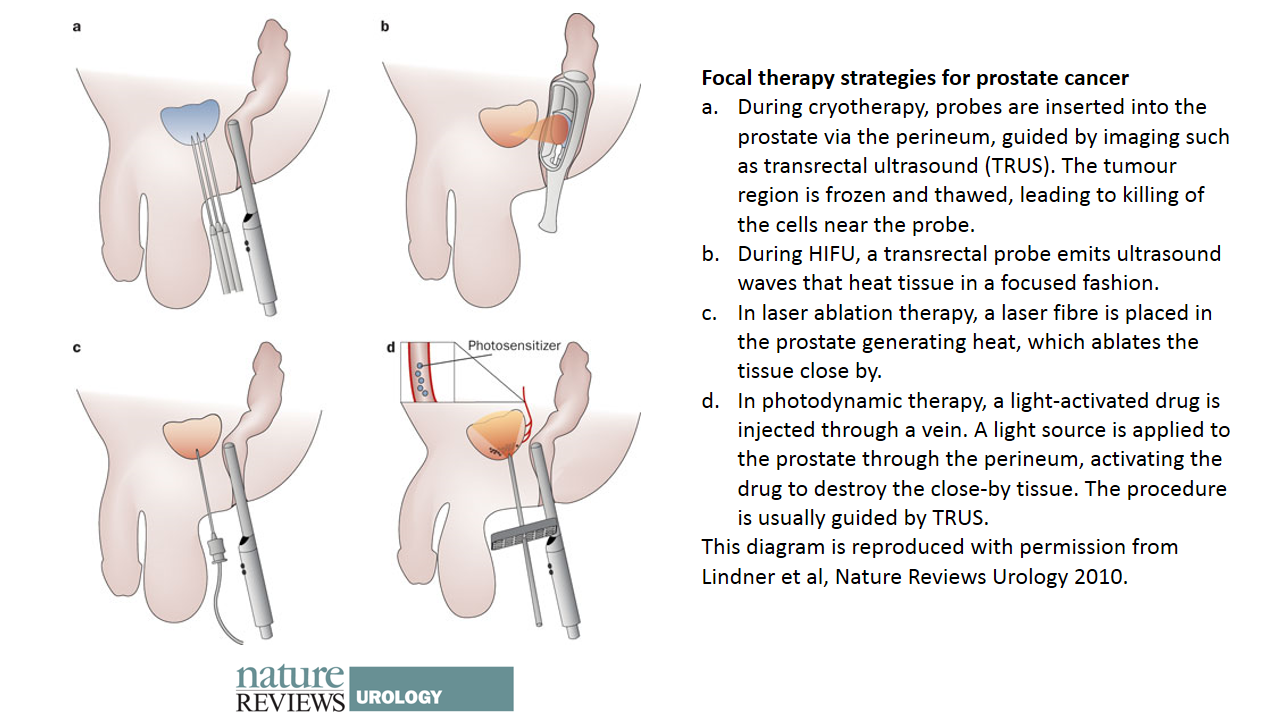 Following is a brief description of major focal therapies and the research for each so far:

Cryotherapy involves cooling to very low temperatures then thawing. This results in destruction of the cooled cells. During prostate cryotherapy, a "cryoprobe" is inserted into the prostate through the perineum to freeze the tumour (seen in part a of the diagram above). This procedure is guided using transrectal ultrasound (TRUS) or MRI.

Evidence for the benefit of cryotherapy is better understood than most other focal therapies. Quite a few phase 2 clinical trials have been published. A systematic review of cryotherapy studies from 2014 showed good short term outcomes. Between 71% and 93% of men lived without recurrence of their cancer for up to 70 months. Incontinence rates were quite low, but erectile function varied. Much longer studies are necessary to determine the how effective cryotherapy is in terms of saving lives and the long term risk of side effects.

Prostate cryotherapy is available in Australia.

During HIFU, a rectal probe emits soundwaves towards the tumour region. These ultrasonic waves heat up their target area, killing cells by causing bubbles to form inside them. This is shown in part b of the diagram above.

HIFU is also used to treat the whole prostate, rather than just the focal tumour region. Most of the research into HIFU outcomes has studied whole prostate treatment. A number of trials are ongoing in Switzerland, Canada and USA to determine whether focal HIFU is effective.

HIFU for prostate cancer is available in Australia.

During focal laser treatment, a laser probe is inserted into the prostate through the perineum (seen in part c of the above diagram). The probe is guided by transrectal ultrasound (TRUS) or MRI. Cells in the tumour region are killed by heat from the laser. Early research results are promising, but the effectiveness of laser therapy in terms of improving long term outcomes is still being measured in clinical trials.

Photodynamic therapy involves injection into the vein with a drug that is activated by light. A laser probe is inserted into the prostate via the perineum, guided by TRUS (part d in the above diagram). The drug is therefore activated by the light in the prostate region, killing cells in the vicinity. A photodynamic therapy called TOOKAD was the topic of a recent research blog. This article describes a randomised controlled trial indicating TOOKAD can benefit men on active surveillance. Clinical data support the safety of this treatment, but long term data are needed to assess how effective they for treating prostate cancer.

Photodynamic therapy does not seem to be available in Australia at the moment.

Irreversible electroporation is currently used for other cancers such as renal, pancreatic and liver. For prostate cancer, a therapy known as nanoknife delivers a low-energy electrical current into the tumour region between needles. The electric current damages and kills the cells in the region. An Australian study was one of the first to trial irreversible electroporation. Prof Phillip Stricker led a small trial with 32 men that showed the technique was safe and had good outcomes in terms of urinary, bowel and sexual function. However the size and nature of the study did not allow them to test whether it was an effective treatment. Currently there are no trials in Australia, but trials are recruiting in the USA, Netherlands and Canada.

Brachytherapy is a common and effective treatment for prostate cancer. It's usually used to treat the whole prostate gland. Up to 100 or more radioactive pellets are inserted into the prostate, aiming to reach each part of it. The radiation damages the cells close by, killing them. Unfortunately surrounding regions such as the rectum, bladder and urethra can also be affected, leading to side effects.

Focal therapies are a group of treatments being developed for low risk, localised prostate cancers. They aim to remove the main (unifocal) tumour site but not the whole prostate, reducing the risk of side effects. Focal therapies will only benefit select patients who have one main region of cancer growth in the prostate. Although some focal therapies are available in Australia, long term data are needed to show whether they are effective in terms of preventing cancer recurrence and reducing mortality.