Highlights from the COSA19 conference

This November, members of PCFA attended COSA19, the annual meeting of the Clinical Oncology Society of Australia. The COSA meeting brings together clinicians, nurses, allied healthcare and scientists to discuss the clinical management and supportive care for cancer. At this year’s meeting urological cancer was a special theme, meaning there were many prostate cancer presentations. Numerous sessions were dedicated to prostate cancer as well as other important aspects of cancer treatment and care. Some of the highlight sessions were digital health, euthanasia issues and end-of-life care, living with the after-effects of prostate cancer and an opening session dedicated to the future of prostate cancer management.

Here we present some of the important prostate cancer presentations at COSA19: 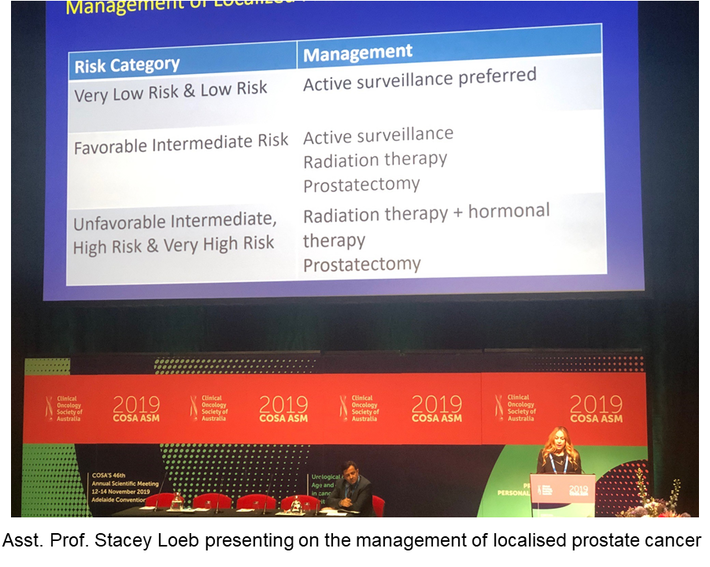 Asst. Prof. Stacey Loeb described the management of localised prostate cancer in the USA and Australia. She described how the use of active surveillance by men with low-risk prostate cancer has reduced the problem of over-treatment. Between 2011 and 2013, 40-49% of men in the USA managed their low-risk prostate cancer by observation rather than immediate treatment. This number in Australia is now close to 75%. Active surveillance means forgoing or delaying treatment until it becomes necessary. It involves regularly monitoring the cancer with PSA tests, biopsies or MRI scans. The reduction of overtreatment in the USA has been an important influence, leading to a change in guidelines towards increasing the use of PSA testing. There are many challenges for active surveillance that need to be improved with research. These include issues with multiple biopsies, determining the best stage at which to commence treatmen and too many men leaving the active surveillance program. 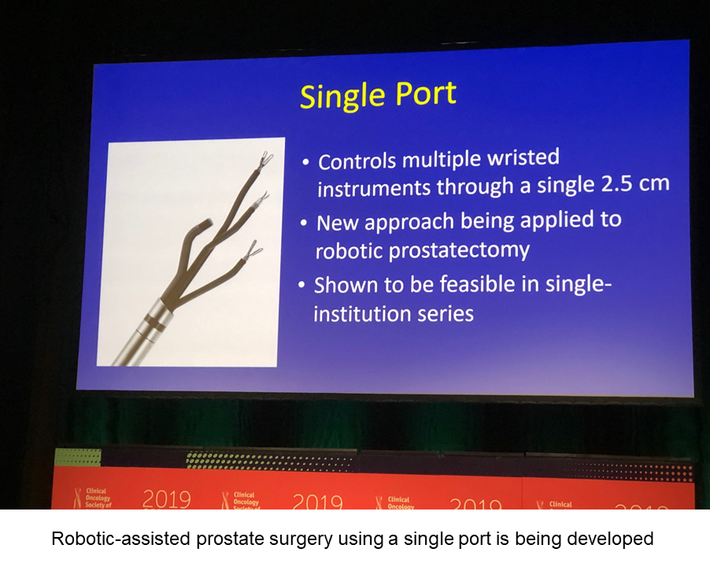 latest new inventions that will likely affect the future of prostate surgery. These are new surgical techniques currently being developed that are not standard care in Australia. They include robotic-assisted surgery that uses a single keyhole incision (see picture), new robotic systems from different companies and Retzius-sparing surgery – a technique with improved urinary continence outcomes. The Menon precision prostatectomy technique aims to leave the prostate capsule (outer layer of the gland) intact. A biopsy is done immediately to detect the extent of the tumour, determining how much of the prostate to remove. This approach aims to help improve erections and sexual function by reducing the damage from the operation, where possible.

Precise and Personalised: Radiation therapy for prostate cancer in 2019

A/Prof Turner spoke about the current status and future innovations in radiotherapy for prostate cancer in Australia.

Radiotherapy for prostate cancer in Australia is most commonly delivered by external radiation beams. The radiation is carefully focussed at the prostate to damage the cells in the gland, stopping them from dividing and killing them. Cancerous cells are more likely to be affected than normal prostate cells. Alternatively, brachytherapy delivers radiation to the prostate via radioactive seeds that are implanted into the gland. This can be done by high or low dose, and in combination with external beams of radiotherapy. Radiotherapy can be a cure for localised prostate cancer as well as a treatment for pain for men with metastatic prostate cancer.

A/Prof Turner described advances in radiotherapy as aiming to:

-improve targeting of the cancer, leading to higher dose to the tumour and higher cure rates

-reduce of the dose to normal tissues, reducing side effects

A recent innovation that aims to reduce side effects is SpaceOAR. SpaceOAR involves extra “filling” inserted between the prostate and the bowels, to push them apart. Using SpaceOAR has the potential to reduce the radiation dose to the bowels, reducing bowel side effects. 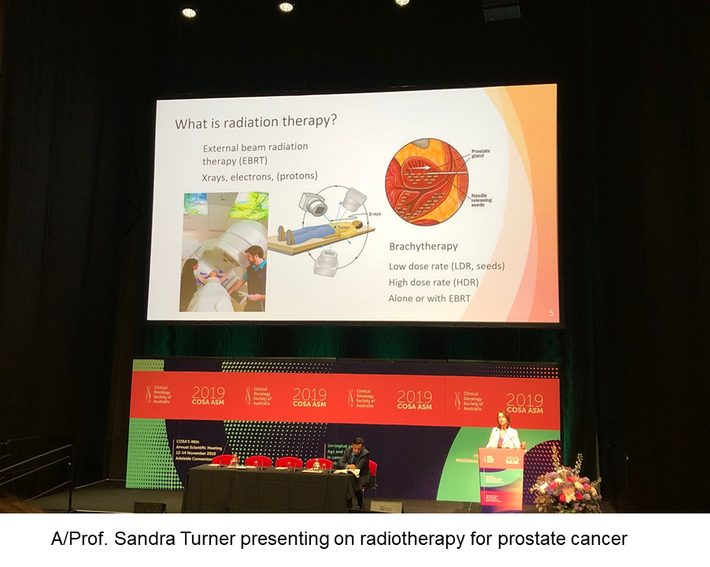 Another important innovation is the use of Stereotactic Body Radiation Therapy (SBRT), also called SABR and ultra-hypofractionation. During this therapy, a higher radiation dose is used over fewer treatment sessions. This is becoming a more common approach for treating localised prostate cancer. SBRT/SABR can also be used by men with oligometastatic prostate cancer – who have a few small tumours that have spread to distant regions. SBRT/SABR is also used to prevent imminent spinal cord compression, a serious compilation caused by tumours growing in the spine.

A/Prof Turner described radiomics, a promising area of research that is being developed for prostate cancer. Radiomics is a process by which a vast amount of information from scans and tests is used to make clinical decisions and predict outcomes. Information from MRI and PSMA-PET scans is used to predict cancer location, cancer cell density, aggressiveness and sensitivity to radiotherapy treatment.

This Australia-wide study recruited 1,064 men newly-diagnosed with prostate cancer. By 10 years, 598 men remained in the study and completed the surveys. Most of these men (92%) had localised prostate cancer. The surveys collected information about the life satisfaction (as related to their health), their symptoms and issues with side effects of sexual function, urinary and bowel incontinence. The study showed that 35–40% of these men experienced poorer physical and mental quality-of-life and life satisfaction 10 years after their diagnosis and treatment. Symptoms of the disease were a greater problem for men with multiple conditions, those treated with hormone therapy, and those from disadvantaged areas.

Results from this study showed that 8 years after diagnosis, urinary function started to decrease, whereas sexual function increased a little. Unsurprisingly, men who had better sexual, urinary or bowel function reported a better quality-of-life. Interestingly, bowel function had larger effect on quality-of-life than sexual or urinary function. These findings show the importance of these treatment side effects and symptoms for the life satisfaction of these men. 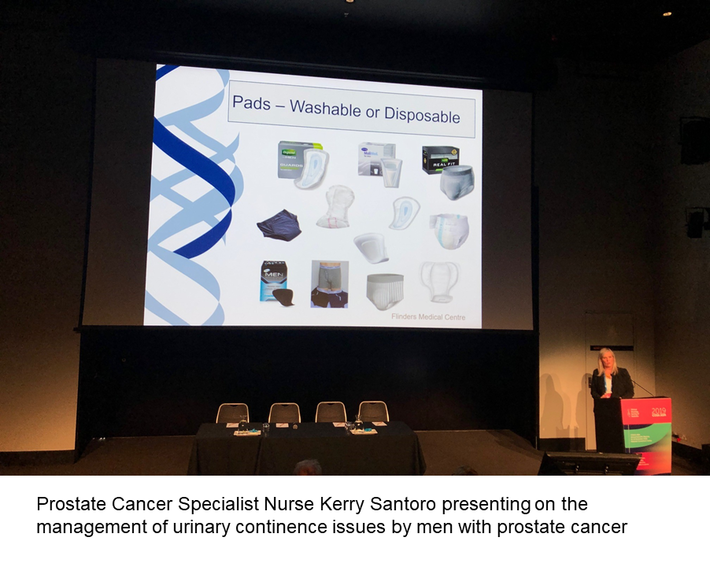 A/Prof Ralph made some recommendations on the basis of the results of this study. The risk indicators (hormone therapy, multiple conditions and disadvantaged background) should be incorporated into survivorship care plans to help bring appropriate care to men at highest risk of poor physical and mental health. Men with prostate cancer should be assessed for these factors and provided with life-long prostate cancer survivorship care.

Prostate cancer risk factors in the NSW 45 and up study

Dr Nair-Shalliker has completed a study using data from a huge study of NSW people. The 45 and Up study is the largest ongoing study of healthy ageing in the Southern Hemisphere. Over 250,000 people from NSW have joined the 45 and Up study. They were enrolled between 2006 and 2009. People were interviewed at the start of the study and at regular intervals since. The interviews asked about medical history, social and education factors and health behaviours such as diet and smoking. Volunteers gave permission for data linking so claims through Medicare and prescription records could be accessed.