Weekly Blog: My life in waves

We all need our happy place, somewhere we can get lost in a sense of something greater than the self, to forget for a while the world of oncology wards, blood tests and scans. For me, it’s the ocean and I’ve never been more grateful to be a surfer than since my diagnosis, even as my performance levels decline with the impacts of the meds and ageing. It helps me maintain a thread or continuum to my old self, my old life, and ticks a whole lot of my self-care boxes. Exercise, immersion in nature, meditation, bliss.

Nostalgia can be bittersweet, surveying our past longingly, but the overwhelming emotion I get from such retrospective indulgences is gratitude. Those of us who’ve lived through the latter stages of the 20th Century and the early 2000s have enjoyed a remarkable era of relative peace, prosperity, affordable travel, technological and medical advances, despite the world’s many ills and however long our innings may be. Here then are a few of my personal favourite, golden moments from a live chasing the giddy thrills of the surf. 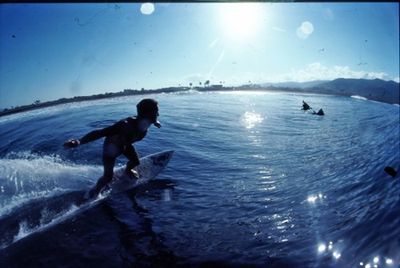 Surf tourism pioneer Paul King had recently opened one of the first surf camps in Indonesia at the previously little-known wave he dubbed Periscopes in eastern Indonesia. Early into my tenure as associate editor of Tracks surfing magazine, we were one of the first groups into the camp and got to surf this pristine righthand reefbreak by ourselves for a week. The accommodation and food were basic, but we didn’t mind a bit. I walked up the beach one day and saw some kids frolicking naked in the shorebreak with a plank of driftwood trying to imitate our play in the ocean, surf culture taking root by osmosis. 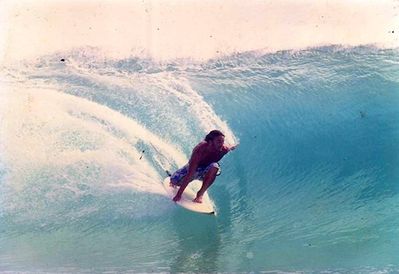 I clearly remember this as one of the best days I’d ever seen at the popular Gold Coast beachbreak. That I managed to get a set wave at all among the feverish crowd seemed a minor miracle. That one of Australia’s best surf photographers bothered to shoot my wave among all the high-profile pro surfers was an unexpected bonus. 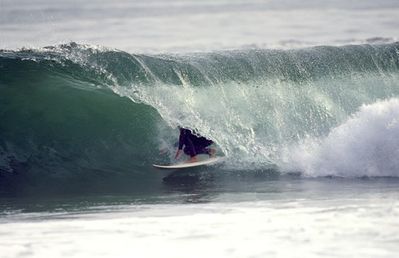 After 10 years of newspaper and magazine deadlines, I figured I needed a sabbatical and so took off to surf my way through Hawaii, Tahiti, Central and South America. I wound up in the quaint coastal town of Iquique in northern Chile and discovered a smorgasbord of stunning reefbreaks. This one close to our hotel became a firm favourite despite the plentiful sea urchins that studded the reef. 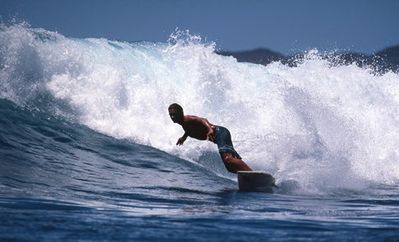 On that same sabbatical I spent a couple of weeks in Costa Rica where some kindly locals took us to a wave they called Ollie’s Point, after Lt. Col. Oliver North, just south of the Nicaraguan border. This was where North allegedly flew in weapons for the Nicaraguan rebels (Contras) to a remote airstrip, as the US set about meddling in Central American politics. There were no such dramas for a bunch of travelling surfers, just a few crusty old locals aggrieved by our arrival with a photographer in tow. 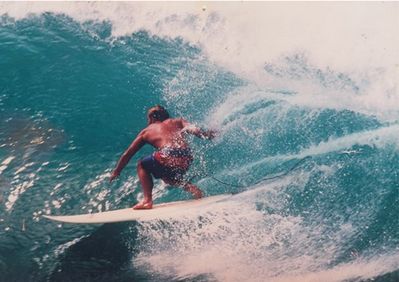 I still remember this wave and this board, a 6’6” channel bottom shaped by master shaper Rodney Dahlberg, the type of board he was making for re-born world title aspirant Mark Occhilupo, my favourite surfer at the time. 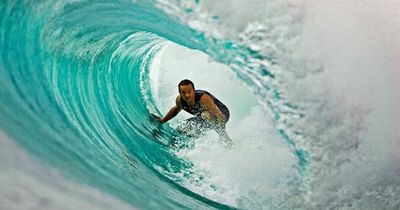 Lance’s Rights was named after a salty old skipper from Newcastle, Lance knight, who used to pilot the cargo ship between Yamba and Lord Howe Island. Until, just like in a melancholy country song, he lost his job and his girlfriend in quick succession (unsure if his dog died). He decided to go wave hunting in remote Sumatra, and stumbled upon this gem from a local fisherman’s dugout canoe. 10 years later I invited him back for the first time since his discovery as part of a magazine trip, and managed to score a couple of gems myself. 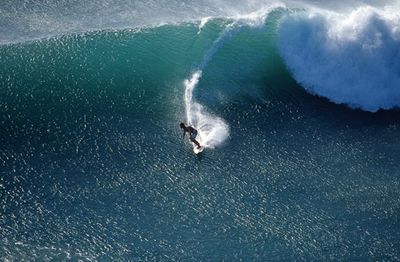 This was long before drones made this sort of aerial angle passe. Back then photographer Grambeau hired a chopper for a vast sum to shoot the booming cyclone swell from a unique angle. Luckily for me, as he hunted memorable and dramatic moments, hanging out the door of the chopper,  he hovered over Currumbin Alley while I happened to pick up a bomb. Ted peered through the view finder, and  went, “Geez, I think that’s Bakes,” and snapped a couple. Forever grateful to have one of my rare, relatively big wave moments recorded. 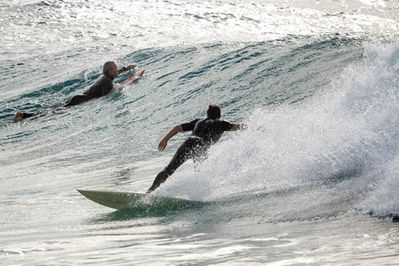 Every year, on the anniversary of my diagnosis (July 7, 2015) I try and go for a surf with a couple of mates somewhere down the coast away from the crowds. It’s a celebration that I’m still alive and a homage to the wave-riding lifestyle that I believe has helped me remain healthy for this long. The waves were nothing special this day, but with a couple of mates and dolphins frolicking it felt like I’d reached Nirvana. 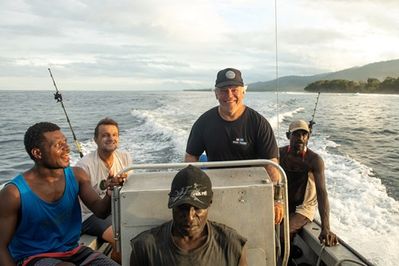 Just before the world shutdown, in early 2020, I received an email asking if I’d like to jump aboard the legendary Indies Trader 3 with the world’s greatest surf explorer, Captain Martin Daly. There were plenty of reasons to baulk at the invitation – the short notice, the labyrinth of obscure airlines and remote airstrips to be navigated, the cancelled oncologist appointment, and the scurry to procure adequate cancer meds to last the trip. The desperate dash to the Brisbane passport office to replace my teenage son’s expired passport so he could accompany me. But I knew this was a once in a lifetime opportunity, in a lifetime of profoundly uncertain duration. So glad I took the leap, seized the day and reaped the rewards. 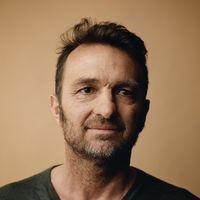 Tim Baker is an award-winning author, journalist and storyteller specialising in surfing history and culture, working across a wide variety of media from books and magazines to film, video, and theatre. Some of his most notable books include “Occy”, a national bestseller and chosen by the Australia Council as one of “50 Books You can’t Put Down” in 2008, and “The Rip Curl Story” which documents the rise of the iconic Australian surf brand to mark its 50th anniversary in 2019. Tim is a former editor of Tracks and Surfing Life magazines. He has twice won the Surfing Australia Hall of Fame Culture Award.

Tim was diagnosed with stage 4, metastatic prostate cancer in 2015 with a Gleason score 9. He was told he had just five years of reasonable health left, but seven years on, at 57, he’s still surfing, writing, and enjoying being a dad. His latest book, Patting The Shark, also documents his cancer journey and will be published in August. Tim will be sharing weekly insights into his journey to help other men who have also been impacted by prostate cancer.

PCFA is proud to have a national network of affiliated support groups in each state and territory of Australia consisting of men and women who have a passion for assisting others who encounter prostate cancer. This network is made up of over 170 affiliated groups who meet locally to provide one-to-one support, giving a vision of life and hope after treatment. Call us on 1800 22 00 99 to find your local group.