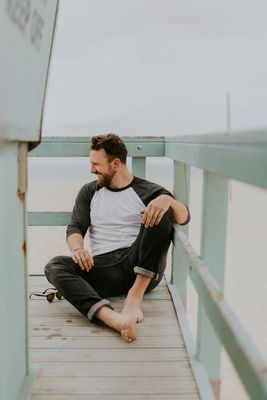 While the diagnosis of prostate cancer can be stressful, the treatments prescribed can be equally so. This anxiety sometimes infiltrates the patients’ sexual relationship and has the potential to affect all parties concerned. Underlying depression may also be a pre-existing condition for some. The psychological disturbances caused by a diagnosis and treatment may be enough to cause sexual dysfunction alone, but this can be compounded by prostate removal procedures, which can damage nerves to the genitals in the process. For others, radiation may be a treatment choice which can also have an effect on adjacent blood vessels and nerves. Another treatment certain people receive is androgen deprivation therapy, which could result in reduced libido owing to low levels of testosterone.

Human sexual function is complex and there are multiple factors to consider. There are many medical conditions, such as diabetes and hypertension (high blood pressure), as well as medications that cause erectile dysfunction. Often therapeutic benefits are a case of trial and error, where some treatments may work for one person and not for another. In other cases, a brand switch or dosage adjustment might be required. There are very specific instructions for taking medications for erectile dysfunction, and it is always advisable to speak to one’s prescribing doctor. One’s doctor should form part of a multi-disciplinary team, and if a patient has underlying psychological issues it may be worth a referral to a councillor, psychologist or even psychiatrist, either in an individual capacity or with their partner/s.

The purpose of this discussion is to explore the next level of medical treatment available. Assuming all medication based options (and even mechanical ones, such as vacuum erection devices) have failed: what’s next?

The potential answer is an intracavernosal injection, which might sound quite technical to the unacquainted. Essentially, it’s the self-administration of a few millilitres of fluid directly into the body of the penis (or corpora cavernosum). The medication allows the blood vessels in the penis to dilate, allowing the penis to engorge with blood, thus resulting in an erection. The needle used to administer the dosage is fine and short, much like the needle used to administer insulin. The prescribing physician would usually have an education session with exact instructions on how it works and the required dosage. It is usually injected on either side of the penis, avoiding the important nerves and vessels located on the top of the penis. The bottom of the penis is also usually avoided, as this is where the urethra lies as well as the head of the penis (glans). Injections should ideally be administered on alternating sides of the penis. After cleaning the area with an alcohol swab, the needle is injected at a right angle to the skin and pressure should be applied for 30 seconds after injection. It is important to remember that after the injection, foreplay or sexual stimulation is required for an erection to result. The dosage can take anywhere from 5-20 minutes to become effective. As when taking tablets to treat erectile dysfunction, this erotic stimulation is important, as an erection is unlikely to spontaneously occur. 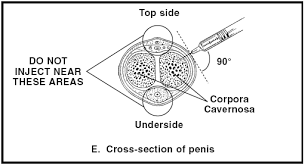 The medication used is usually called alprostadil (but may be available under a variety of trade names). It should be stored in the fridge, with the dose and amount of medication to

inject being prescribed by your doctor. Side effects from the injections may include localised pain, bruising or scarring under the skin, infection from an asterile technique. Perhaps the most alarming potential side effect, however, is priapism (a painful and persistent erection lasting more than 3-4 hours). If exercising, applying a cold compress, or taking Sudafed tablets are not helping to settle the erection at the 4-hour mark, it is important to present urgently to the emergency department for further treatment.

Notwithstanding the potential side effects, it is a very safe and effective treatment used by many men of various ages all over the world. In men who have undergone a radical prostatectomy, the success rate of using these injections is 85%1. In a study of 683 men using alprostadil penile self-injections over a six-month period, 87% of the 471 subjects who completed the study were satisfied with results (as were 86% of their partners)2. A study by Mulhall et al in men after a radical prostatectomy confirmed greater patient satisfaction rates with intracavernosal injection therapy, compared with tablets such as sildenafil (Viagra) and a greater return of spontaneous functional erections3. Trustin Domes and Australian Urologist, Eric Chung, in their study found that 28% of study participants had erections lasting longer than they had wished, while more than 60% who reported effective outcomes continued to use the injections in the long term4.

In summary, don’t feel trapped if the tablets you’ve been prescribed are not resulting in the erection you (or your sexual partner) desire - alternative options are available. Speak to your general practitioner for referral to a urologist or sexual medicine physician to find out more about this method of treatment.